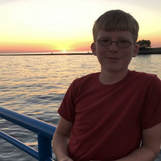 RJ began his reading journey around the age of three through the medium of the weather section in The Morning Sun  newspaper. He continued  his journey in kindergarten with anything he could get his hands on. In his kindergarten room, there were bins full of books that progressively got harder. He managed to get through these bins some time before he was expected to. It was at this point that he was introduced to the Accelerated Reader (AR) program. This reading program gave incentive to readers with a small prize after taking tests to prove their retention. By the fourth grade, RJ was reading at a post-high school level on the AR metric. The AR program supported RJ's reading throughout his elementary school years. The local library also had a summer reading program that rewarded kids for reading each summer, which RJ was always sure to take advantage of. RJ's affinity for reading changed in middle school, however. By his eighth grade year, he was only reading an average of four to five books per year. His online reading, however, took off around the same time. This is when he began reading mostly for information instead of entertainment. The discovery of computer programming in the seventh grade gave rise to his need for more information. Unfortunately for him, the local libraries (including the school's) did not have physical books on programming that were relevant, as the field changes frequently. This is why his reading shifted to being online as opposed to books. This trend continued into high school, where he still averages only about five books per year. RJ continues to read to increase his programming knowledge in addition to many other subjects including current events, politics, machining fundamentals, electronics fundamentals, and economics. He currently is rereading 1984  by George Orwell for enjoyment, and perhaps to draw parallels to today's society. Orwell is his favorite author, as his works are packed with messages.

RJ is not only a reader, but a writer as well. While his writing may not always be the highest quality, he still tries. He learned to write through practice, especially during school. He believes that this is the way that many people learn to write. He also believes that people write for a variety of reasons. These include but are not limited to improving their writing skills, enjoyment, longing for a challenge, trying something new, and being compelled to do so by government bureaucrats (aka teachers). In order to write, people need only a working knowledge of the language in which they choose to write, a drive to write, and a topic about which to write. In order to write well, however, people need an advanced knowledge of the language in which they write and a good sense of theme and cohesion in addition to the drive and topic. RJ likes to write science fiction short stories, computer programs, and the occasional research paper. RJ's ideas for writing are extracted from his life experiences. He decides what to write about by waiting for an idea that affects him emotionally. RJ enjoys constructive criticism on his writing, but it must be short and concise. He writes stories infrequently at home, but works on software almost daily. He is generally confident in his work, but often points out the flaws in his programs.